The Dark Side of Getting Really Lean: When Aesthetics and Health Don’t Match Up

The Dark Side of Getting Really Lean: When Aesthetics and Health Don’t Match Up

It was 7:30pm, and my stomach was growling ferociously. I had guzzled a bunch of water along with several cups of tea in a feeble attempt to take the edge off, but that had proven fruitless.

I had already eaten my last scheduled meal for the day well over an hour ago, so I did the only thing that I could think of to escape the hunger: I went to bed. Even though the sun was still out, sleeping was my only solace. I didn’t really mind it, though, because I was constantly plagued by fatigue brought on by my own self-inflicted dietary restriction.

Each night, those ten blissful hours (!!!) in bed was the only time I stopped thinking about food. However, as soon as I opened my eyes in the morning, the first thing to greet me were those ever-present, gnawing pangs of relentless hunger that I had sadly become so accustomed to.

My daily menu didn’t waver. I had five meals a day, totaling about 1,100 calories, which isn’t nearly enough for most adults, much less a woman of my stature, standing at nearly 5’10” and weighing around 155 pounds.

My first meal was egg whites and oatmeal, the next was a protein shake, and the following three consisted of 4oz of lean meat and green vegetables, with one of those meals containing 4oz of sweet potato. For a few weeks in the beginning, I had been allowed 1 TBSP of nut butter each day, but at about six weeks out from my show it had been removed.

I was strength training four or five days a week, following a body-building style. I would drag myself to the gym feeling utterly ex 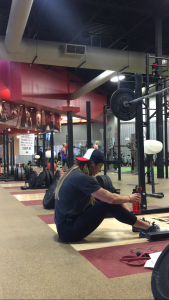 hausted, and it wasn’t until about half-way through my training that my pre-workout supplement and coffee combo would begrudgingly kick in and get me through the remainder of my session.

It was summertime in Las Vegas where temps soar to around 115 degrees during July, yet I was always cold. I was the only person walking around in a hoodie and sweatpants, regardless of the time of day.

I was a disaster physically, and a basket-case mentally. My mind was always fighting an internal battle between throwing in the towel so I could finally eat and feel human again, and sticking it out because I’m stubborn and quitting isn’t my style.

My sex drive had disappeared months ago, which didn’t really matter to me because my obsession with dieting, training, and my quest for physical perfection had made me hyper-critical of my body, leaving me uninterested in being touched by my boyfriend anyway.

Welcome to my preparation for a Figure competition

I was about 12 weeks in to an 18-week prep for my first Figure show, and sadly, the scenario listed above will ring all too familiar with many women that have competed in physique sports.

Things Aren’t Always What They Seem

While I had never felt worse, my body had never looked better. Everywhere I went, people complimented my physique. All they saw was a lean, muscular body, but they had no idea the cost associated with it. They told me that they wish they looked like me, how impressed they were with my willpower, and asked if I could help them to get their body to look like mine.

I was a personal trainer at the time, and the leaner I got, the more people wanted to train with me. While I believe I was – and still am – a great trainer, the reason for the uptick in business at the time was based solely on how I looked. I was fairly new to the industry, and trying to grow my business, so the influx of clientele fueled my fire to continue with the dieting madness that I was participating in.

People were pouring on the praise, but I was moody and felt awful all of the time. I had a flood of new clients, but I was so drained that I had to force myself to the gym to train them. All of this made the entire situation very confusing, and resulted in a pretty substantial internal battle that I fought every day.

When I was three weeks out from the stage, I had an exceptionally rough day, and dove headfirst into a carrot cake.

I was consumed by guilt, and felt like a failure, nearly causing me to pull out of the show. After a day or two, I finally pulled myself together, and got back on my diet.

I followed a pretty standard water manipulation protocol the week leading up to the show, which is fairly common practice in physique sports. Sadly, although not surprisingly, the dehydration coupled with starvation made me quite sick the morning of the show, and I ended up starting to faint while being spray tanned.

I got something to eat, had some water, and went on to compete that day, taking first place in my class.

Unfortunately, that was the only highlight of the entire experience. 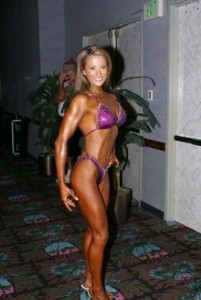 The rebound that I suffered after my show was vicious. As awful as my prep was, the health problems that followed were substantially worse. I had always been under the impression that once my show was over, my life would go back to normal, and I would instantly feel better.

It all got so much worse.

I packed on about 30 pounds over the next few months. My skin went crazy, my digestion was a wreck, and any shred of energy I had been hanging on to was gone. I started to get anxiety about leaving the house, because I was having such a difficult time navigating people’s comments to me, which included one male acquaintance that rudely asked, “Wow, do you even workout anymore?”

My body felt completely out of my control.

It took about six months for my weight to stabilize, and about eight months after my show, my weight finally started to creep down again. I eliminated all cardio and any high-intensity workouts because my body simply could not handle it. Instead, I focused on heavy strength training with plenty of rest between sets, slowly increased my food intake, and slept a lot – around nine hours each night, along with a daily nap.

Over the next couple of years, I tried dieting a couple more times, although not nearly as extreme, but each time I did I was left feeling absolutely drained. Any caloric deficit or intense training seemed to wipe me out. There were several days that I was so exhausted that I felt unable to get off of the couch.

I finally sought help from a couple of Naturopathic doctors, and was diagnosed with a slew of thyroid and hormone problems, all hypothesized to have been brought on by that original 18-week diet, and worsened each time by the subsequent dieting and training.

Working closely with my doctors, and following their instructions perfectly, I have gotten most of my hormone issues under control, however I am still on medication for my thyroid. 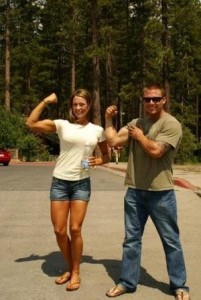 When it comes to health, our eyes can deceive us. It’s easy to look at somebody that is lean and muscular, and assume that they are healthy, and have it all under control. However, as evidenced with my own personal experience, you can see that isn’t always the case.

While the word ‘health’ means different things to nearly everybody, I think most of us can agree that optimal physical health is built upon a foundation of the following:

There are many people that nail the above consistently, yet the majority of those people (myself included) don’t possess the genetics to get incredibly lean without going to extremes, and those extremes can potentially come with a hefty price-tag:

While hormone issues can arise from chasing the unicorn of extreme leanness, other unhealthy things can pop up, too, such as food fears and fixations, obsession over how your body looks, and being overly concerned with what other people think about your physique.

Do Not Sacrifice Health for the Sake of Fitness

Much like anything else, there can be too much of a good thing when it comes to diet and exercise.

When your entire existence is about trying to get leaner, it’s easy to develop tunnel vision, and other things – such as spending time with friends, trying new things, and enjoying experiences with loved ones – starts to fall by the wayside.

What feels good mentally and emotionally with your training or dieting may not be what is best for you physically, and that is a tough situation to try and navigate. That high-intensity workout may feel like it’s helping alleviate stress, but it may be throwing fuel onto an already out-of-control fire.

When evaluating your food and exercise, it’s important to look at things critically, and ask yourself if it’s helping or hindering your health.

There are several seemingly healthy practices that actually aren’t at all. Take the example of a person in a chronic sleep deficit that is under a ridiculous amount of stress that still insists upon dragging themselves out of bed at 4am several times a week to squeeze in an intense training session before starting their day.
At surface level, we may view this as healthy – exercise is generally considered good behavior by most – however when we apply context, we know that high intensity exercise that is encouraging a further sleep deficit is not the answer. This person would be infinitely better off getting the extra 90 minutes of sleep that is spent at the gym, and taking a long walk during the day to get in some movement, and decrease stress.

How Do You Want to Feel?

A person’s physique doesn’t necessarily tell the whole story.  It can be easy to covet a lean, muscular bod, but the most important thing to take into consideration is health.

For me, my lifestyle is everything. I love going to eat with friends, enjoying some wine, skipping the gym if I feel like it, and traveling without the stress of what I’m going to eat and how I’m going to get my cardio in. I can’t do any of those things if I’m constantly drained, grumpy, and obsessing over food. So for me personally, I’d rather be a few pounds heavier and not have to worry about it.

When working towards change, ask yourself: How does this make me feel?

If not, it’s time to re-evaluate and adjust accordingly.

Dig in deep. Your body will let you know if what you’re doing is best for you.

Get them here for FREE.

The best part? Each workout takes 20 minutes or less!

This site uses Akismet to reduce spam. Learn how your comment data is processed.