The Scale: Not Worth It’s Weight 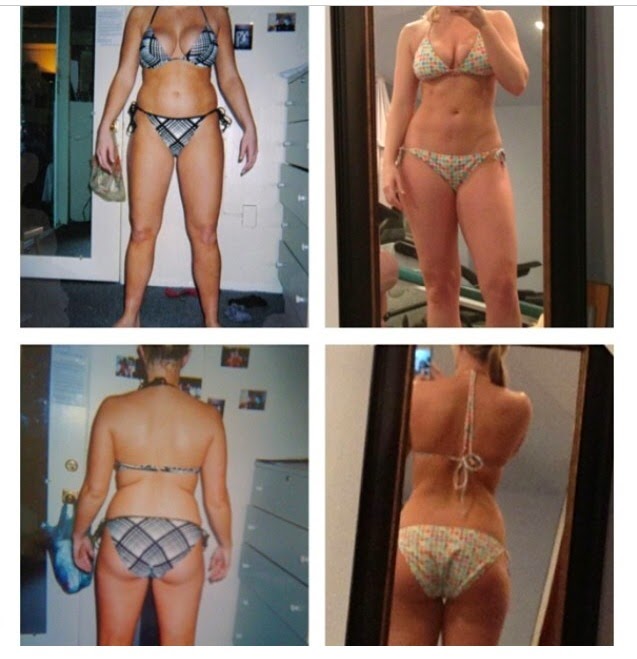 The last time I knew what I weighed was November of 2011.

For about eight months prior to, I, embarrassingly enough, let myself become completely consumed by the number on the scale. This is ridiculous, because I don’t even know what I ultimately hoped it would say. I just knew that I wanted it to be lower, and then lower, and still lower again.

I would wake up in a fantastic mood, leap out of bed, and stroll into the bathroom feeling like a million bucks. I’d hop on the scale, and then promptly become furious at whatever number popped up, and proceed to completely lose my marbles.

FYI: declaring an unsubstantiated Defcon One emergency at 6am is a really effective way to ensure an awful day, and it also makes people scared of you.

This insane behavior repeated itself for a few months until I finally recognized it for what it was – extremely self-destructive, obsessive, and unhealthy. Something had to go, and it was either going to be my sanity – what was left of it, anyways – or the scale.
I chose the latter.

In November of 2011, I tossed the scale into the garbage with gusto, flipped it the bird for good measure, and promised myself to stop acting like a lunatic.

Part of me was relieved that I was finally free from the mind-controlling aspect of a piddly, insignificant number, but the other part of me was concerned that I needed the scale. How will I know what I weigh?
A couple of weeks later was when the lightbulb turned on that would end up permanently altering the course of my thinking:

Who the hell cares what I weigh?

Do my friends care what I weigh? My loved ones? The people at the DMV?
No, no, and no.
People that love you care about two things: your health, and happiness, neither of which should require a scale to tell you, so why do so many of us put so much emphasis, day in and day out, on what is ultimately an insignificant number?

The Scale Only Tells You the Weight of Your Body.

The number that comes up on the scale means exactly one thing, and one thing only: how much your body weighs at that particular moment in time. That is it.
It doesn’t tell you about your sleep quality, stress levels, health markers, muscle mass, nutrition, how your lifts are going, you’re happiness, or anything else that actually matters.
So, basically, it’s nearly pointless.

A woman could weigh a relatively low number on the scale – let’s say 125 pounds – yet be sedentary, lethargic, unhealthy, and carry a higher than normal amount of body fat.

On the flip side of this, a woman could weigh 180 pounds, be a weight-smashing machine with glowing health and self-confidence, bouncing off the walls with energy, and carry a lower than normal amount of body fat.

I can certainly tell you which one I’d rather be, higher number on the scale be damned.
You can take two women, at the same height and weight, but with different body compositions, and even though the scale reads the same for both of them, their physiques will look very different.

Your friend so-and-so looks smokin’ hot at 145 pounds? Awesome! However, that 145 pounds will look differently on you, depending on how much muscle you have, and where your body stores it’s fat.

Let’s take a look at how the same person at the same weight can look very different based on different points in their lives.

To help me demonstrate this, I have a few pics of myself, and my friends Kelsea and Molly, who have given me their blessing to share their photos and details with you:
Molly Galbraith
185 pounds on the left.
Nine years later, more muscle, tons of strength gains, significantly lower body fat,
and 183.5 pounds on the right.
1.5 pound swing, yet a world of difference!
Kelsea Koenreich
138 pounds on the left in 2011.
In 2014 on the right, also at 138 pounds,
significantly more muscle (hello, arms!), lower body fat,
and some insanely strong lifts. 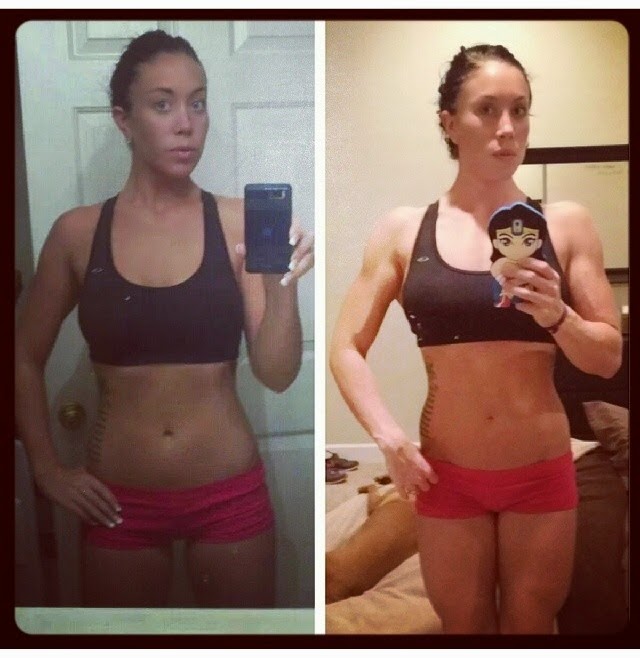 Me.
On the left, 158 pounds, and mother-effin’ cardio queen, before I started powerlifting.
158 pounds on the right 3 years later,
with much more muscle, significantly less body fat,
some beefy squat, bench, and deadlift numbers, and brand new quads.

All three of us have inarguably made some pretty impressive progress over the years, but if we were basing things off of the scale alone, it’d show that we haven’t done much of anything except for maintained, which couldn’t be further from the truth.

She QUIT… all because of the scale.

I have a good friend that has given me her permission to share her story with you.
My friend was battling some big issues. Over the years she had developed some bad eating habits, gained a substantial amount of weight, and because of that was suffering from low energy, health problems, low sex drive, and terrible self-confidence.
After reading one of my posts, she embarked on the Whole30, and she was absolutely killing it. She text me often to let me know how well it was going. After the two week mark, her cravings had nearly subsided, and she went so far as to say it was actually very simple to stay the course. She reported more energy, a boost in confidence, and couldn’t stop saying how excited and optimistic she felt! Woohoo!
About three weeks in, she weighed herself, even though the Whole30 specifically forbids stepping on a scale (and soon you’ll see why).
She had only lost a few pounds, and she was crushed. Even though she had been feeling fantastic, and had made absolutely sweeping changes to her nutrition, eating habits, and was setting herself up for a lifetime of better health, she was discouraged beyond belief because of a number, and she quit.
It was heartbreaking.
All of the potential good that could have come from this, gone, because of the stupid mother-fudging scale.

We believe that once we arrive at a specific destination, it will bring us abundant joy and happiness. This is the trickery of what is called the Arrival Fallacy.

Sure, reaching a goal feels good, and improving your body composition will inevitably help your self-confidence to some degree, but your self-love won’t be flipped on like a light switch just because you hit a certain number on the scale.

Striving relentlessly towards a specific digit gives us tunnel vision, and we convince ourselves that we can’t be happy with our body until we get to that point.
Additionally, we become so out of tune with how our body actually feels, that we lose sight of all of the things that are going well, because we become so dependent on the scale to tell us whether things are “good” or “bad”.

There is so much more to improvement that has nothing to do with the scale, or even with measurements, for that matter.

Since I stopped tracking the scale, and really, anything else other than the weight I slap onto the barbell, I have become more in tune with my body than I ever have been. Eliminating the stress of tracking my weight and checking my bodyfat percentage has freed up ample energy and precious brain space to enable me to pay significantly more attention to what is going on inside my body, and what it’s trying to tell me.


The following are some examples of making progress in health and fitness, that are unrelated (to a degree) to the number on the scale:

One of my nutrition clients made this, and gave me her permission to share it:

Stepping on the scale can be a much-needed wake-up call for some. Seeing things in a stark black-and-white perspective can be necessary in order to jumpstart change for some people, and I recognize the value of it in those situations.
The scale is also a necessary tool for competitors that are working towards a certain weight class.
Where the scale gets problematic is when you are letting it make or break your days, or when you are determining all of your progress or self-worth by the number that shows up.
Let’s redirect our focus to things that really matter!
Work towards health, happiness, and performance; not an irrelevant number on the scale.
Remember, there is so much more to progress than that number.
I have gone 2.5 years without seeing my weight – and I mean not one single time – and what do you know? I’m happier, healthier, stronger, and more confident than I’ve ever been.
A good friend of mine said something to me about two years ago, and it has echoed in my head ever since:
“Nothing is more beautiful than radiant health and happiness.”
Now, who wants to bring their scales to my house and have a scale burning bonfire?!
Has the scale been helpful or a hindrance to you?
Could you go a few years without weighing yourself at all?
There are no wrong answers!
Let’s chat below!
21 Comments
By Jen Comas
fat loss health kiddos

“Do I look fat?”  I was five years old and remember looking at my gorgeous, size 6 mother like she was crazy for asking me that. I was too young at the time to understand that her mind was…

2012 Reflections: Thyroid woes, staying true, and being a chickenshit.

2012 Reflections: Thyroid woes, staying true, and being a chickenshit.  Yep, I’m doing it. The sometimes cheesy and always predictable year-in-review blog post. As each year passes, I think that the lessons I learned and the experiences I had…

Love, without the handles: Part I

Being in love is exhilarating, isn’t it?Holding hands, going to dinner, snuggling, sipping wine, taking trips, going to breakfast, eating chocolate, ordering pizza, going to sushi, grabbing lunch… and before you know it POW!  you’ve been hit with the…

Everybody is so busy nowadays. We work, workout, train clients, travel, answer emails, take care of kids and pets, clean the house, study, wash our cars, race to the grocery store, cook food and run to classes, all while…